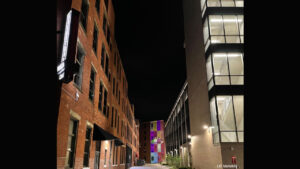 KALAMAZOO, Mich. (WOOD) — Kalamazoo’s newest $70 million development is finished and stakeholders are ready to share what’s next for the community space it includes.

Catalyst Development announced the completion of The Warner Building and 180 E. Water Street on Monday.

On Thursday night, Catalyst and project partners Treystar and Southwest Michigan First will join Kalamazoo city leaders to mark the completion of the adjoining Haymarket Plaza by firing up the site’s new projection mapping system. They’ll also share what events and plans are lined up for Haymarket Plaza.

Thursday’s dedication event will also include a presentation by former Kalamazoo Mayor Bobby Hopewell and performances by Yolonda Lavender and Pink Sky.

Tenants started moving into the 45 apartments at 180 E. Water Street in July. As of Monday, four units were still available.

Haymarket Plaza connects both buildings to the surrounding community with decorative colored concrete and a set of four mapping projectors that will display art, information and entertainment on the side of the Haymarket building.

Thursday’s dedication runs from 6 p.m. to 9 p.m. at Haymarket Plaza. The event is free and open to the public.

Read the full story at woodtv.com.