Kalamazoo-area art to be displayed at Haymarket Plaza 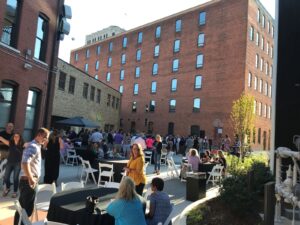 KALAMAZOO, Mich. — The official opening of Haymarket Plaza was celebrated on Thursday with festivities, an opening and dedication event and a special announcement.

During the ceremony, the Arts Council of Greater Kalamazoo announced they would partner with Treystar to oversee arts and cultural programming for the plaza.

The space has a projection mapping system that can turn a section of the Haymarket Building into a canvas to display community art, announcements and entertainment.

“Community engagement and placemaking were at the forefront of Treystar’s decision to create Haymarket Plaza,” said Fritz Brown, Treystar’s partner and CFO and Monroe-Brown Foundation representative. “Working together with our partners at Catalyst Development and The City of Kalamazoo, we’ve created a space that will encourage meaningful social and business interaction in the heart of downtown Kalamazoo. Partnering with the Arts Council of Greater Kalamazoo to activate this innovate space with arts and cultural programming will ensure that Haymarket Plaza is well utilized and enjoyed for years to come.”

“The Arts Council of Greater Kalamazoo sees this venue in downtown Kalamazoo as an excellent opportunity for businesses and artists to comingle, for audiences to interact, and for emerging student artists to be recognized,” Chesak said.

The first utilization of Haymarket Plaza is scheduled to be next month’s Art Hop starting 5:00 p.m. Oct. 1.

Nine artists will be featured in the plaza with Kalamazoo musician Carrie McFerriin.

Besides Art Hop, the council has planned live music, theatre, film and others at the plaza with weather permitting.

Arts programming is scheduled to run March through October on Thursdays through Saturdays.

“We are eager to see Haymarket Plaza fully utilized and busy with activity under the Arts Council’s management,” Brown said.

The opening and dedication event included live music from Yolonda Lavendar and Prink Sky and a small 3D preview of the plaza’s projection-mapping technology.

The companies partnered with the city of Kalamazoo to reimagine their shared alley known as Ihling Alley.

The plaza can be rented for gatherings and private parties.

Read the full story at wwmt.com.