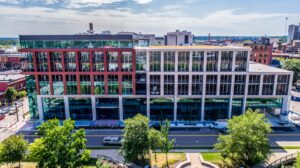 Despite pandemic-related shutdowns and delays, Catalyst Development successfully completed its most recent construction project in downtown Kalamazoo, Michigan. Located on Water Street, the commercial portion of the mixed-use development is known as The Warner Building and the residential portion has been named 180 E. Water Street.

The Warner Building is home to some of the area’s most notable businesses and nonprofits including Warner Norcross + Judd LLP, Southwest Michigan First, Stryker Johnston Foundation, Communities In Schools of Kalamazoo and The Kalamazoo Promise.

Catalyst intentionally cultivated the project’s mix of businesses and nonprofits, all with a high-level of community involvement, to complement its residential offerings.

Running along the north side of East Michigan Avenue between Portage and Edwards streets, the plaza joins Catalyst’s 180 E. Water Street project and The Warner Building with Treystar’s Main Street East and Haymarket buildings.

Named for the historic Haymarket District where it is located, the plaza is designed to create a unique gathering place for downtown residents, those who work in the area, and visitors.

Designed by TowerPinkster Architects with assistance from Kingscott Associates, Haymarket Plaza features a snow-melt system, decorative concrete, lighting, Landscape Forms furniture, an open area designed for entertainment and/or food trucks, and an outdoor seating area for food/beverages. Four projection-mapping projectors are included to display art, announcements, and entertainment on the northeast elevation of the Haymarket Building in the evenings.

Read the full story at rejournals.com.